It was a long time coming but the people of Campbelltown finally got their own pool in 1967. There was now no need for a hike out to the Woolwash or a drive to the river at Menangle or having to be satisfied with a cool down from the garden hose.

A pool had been planned by council as early as 1960. The following year a swimming pool committee was formed and there were expectations that building of the pool would be started by 1963. When the then Town Clerk Harley Daley was asked by Alderman John Marsden when he thought work would start he replied: "The Summer of 1963". However for a number of years continuous arguments raged over where, when and how it should be built. Finally in 1965, with the help of the Campbelltown Apex Club, council set up a pool construction fund, and six months later a pool was announced as the next fundraising project of the Fisher's Ghost Festival. 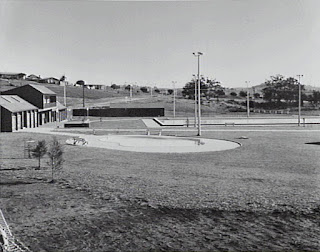 Deciding on a location then proved to be a problem with the north and south of the LGA staking their claims. It was eventually decided to build in the new suburb of Sherwood Hills which is today's Bradbury. Anticipation in the town was high during the lead up to the opening. Cars would continuously drive around the site checking the construction progress. It was hoped and planned that the pool would be opened in December so the population could cool off during that summer. However they had to wait until March and then suffer the disappointment of a cold weekend for the opening. On Saturday March 11 1967 the Campbelltown Swimming Centre was opened. It was an Olympic-size swimming pool and, at the time, the only nine-lane pool in NSW. It cost $304,000. Despite the freezing wind and cloud for the day after the opening, 1152 people poured through the gates for a dip in the new pool. 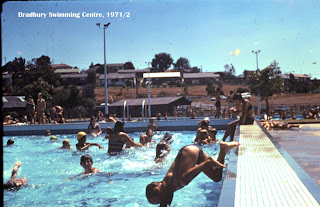 Taken in the Summer of 1971-72 (Clarice Stretch Collection)

On the 12th September 1987 a new heated indoor swimming pool was opened at the Centre by Mayor Bryce Regan. The official opening was originally set down for August 15, however for several days prior to the opening  there was a malfunction in the sand filter, causing a major constructional fault. 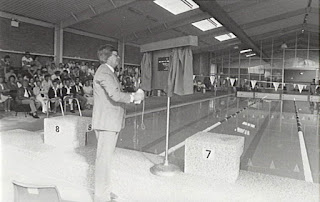 The official opening of the indoor swimming pool in 1987

In 2011 the pool was re-opened and re-named after an extensive $1.2 million upgrade. It was named after former Campbelltown Mayor Gordon Fetterplace who died in 2008 after a battle with cancer.