During the early 1960s, it became apparent that there was a need for a history of Campbelltown to be put together in one volume. Both visitors and residents felt the need for such a history to be written. In 1963 Alderman F. Ward requested council have such a publication prepared. Other aldermen were also enthused by the proposal and an author was commissioned. He was William Alan Bayley, resident of Bulli, collector of local history, a teacher with the New South Wales Education Department and fellow of the Royal Australian Historical Society. He had previously written similar histories for other areas including Albury, Bega, Bulli, Crookwell, Goulburn, Grenfell, Kiama, Nundle, Shellharbour and Young.
In 1966 the finished work "History of Campbelltown" was launched in the Council Chambers. Mayor Tregear and other dignitaries were present. Both William Bayley and Mr Stephen Roach, local artist and designer of the book jacket were also in attendance.
After the launch everyone moved to the library where a display of historical items had been prepared in association with the Campbelltown Historical Society. The book went on sale for $2.70!
Not everyone was happy with the final product. A letter to the newspaper, although generally complimentary, noted the omission of references to cultural activities in Campbelltown and the importance of the St Elmo Estates to the growth of Campbelltown. These points must have been noted as they were addressed in the revised and expanded edition published in 1974.
The book remains an important reference tool for the history of Campbelltown and is commonly and affectionately referred to as "Bayley's". We hold both editions at H.J.Daley Library in the Local Information collection. 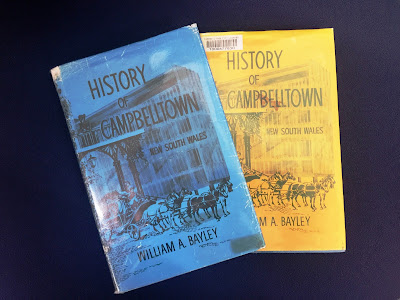