"Sweet" Memories of the Cordial Factory

"Here was made the finest soft drinks in the land...the sweet sickly smell of syrup and sugar permeating the atmosphere for a hundred yards or so". This was how former Campbelltown resident John Hepher described Hayes Cordial factory- an institution in the town for many generations.

In fact cordial manufacturing has been part of Campbelltown's history since early times. Newling and Walker were operating a cordial factory in Queen Street in 1880. In the 1880s Gilbert Bray and Company operated a cordial factory and later manufacturers included Samuel M. Jenner and Joseph Pickles Seddon. Seddon arrived in Campbelltown in 1895 and took over the business from a Mrs Hurley (another reference has a Mr Druitt as the owner). When the Campbelltown Co-operative Creamery Company opened in 1899, it shared premises with the cordial factory and was also managed by Joseph Seddon. The site for this was in the area bordered by Queen Street, Patrick Street, Railway Street and the railway line. 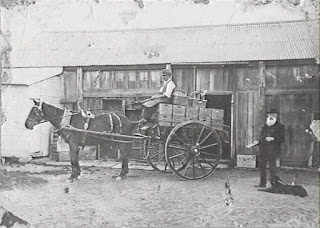 Joseph Seddon standing in front of the cordial factory with an unknown man in the delivery cart (Photo: Campbelltown and Airds Historical Society)

In 1924 Gus Hayes worked for Seddon and when Gus died suddenly, his son Reg left school to work there. The factory had been known as Hayes and Seddon and then Hayes and Howell after that. After Reg joined Seddon, he bought Howell out. Joseph Pickles Seddon retired about 1927, living for another ten years in a cottage in nearby Railway Street. Reg Hayes now owned the business and it became Hayes Cordials. 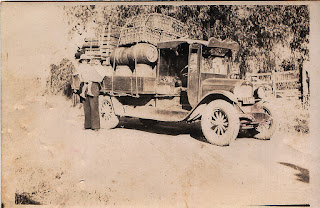 Reg employed two young lads to help him in the factory: Paul O'Loughlan and David Milliken. Now both aged in their seventies, they recently described what it was like working there:

David: "In those days to make ginger beer and ginger ale, you had to boil the ginger root then get the syrup off. Once the mixture was boiling in the huge copper pots over the fire, we would stir it up and skim the ginger. Burn you to death when you tasted it although it was really good! He used to make special lemonade for the hotels which was a lot stronger then ordinary lemonade. It was in a green shaded bottle, which was how you knew it was pub lemonade and available in shops. You would have to line up the bottles, add a little syrup in each one, then put them in the machine for carbonating. The dry ginger ale was beautiful. The ginger beer was just the best ever. All the cordials were handmade, the lemonades, orange, lemon, passion fruit, it was all made from fruit provided by "Just Fruit" up at Keith Harris at Thornleigh.

There was a big bottle washer that used caustic soda, which you didn't play with too much. It was a good machine. Sometimes the bottles were too dirty and you would have to get there with a brush and clean the bottles by hand. That was another bad job. I must have spent hours and hours cleaning the bottles with a brush."

Paul: "I commenced helping Reg before I started school. I was the bottle washer helper. His washing machine was the old style full length machine which was on a belt and you put the dirty bottles on at the front. It would go around the cycle, take off the labels and clean the bottles. Every now and then the exit end would get clogged up with labels and Reg, not being a small man, required someone of smaller structure to get in and clean it out, and I was the key for that. I enjoyed it very much and at the end of the day there was always a bottle of lemonade or creaming soda to take home to mum."

The building was far from glamorous. It was originally just a slab timber building that was later extended by Reg Hayes with corrugated iron. The original wooden building had beautiful old timber stairs and undressed sapling roof-ceiling rafters. It had sandstone flagstones on the floor. These flagstones were reputed to be the original ones used on the Campbelltown Railway Station which was built in 1858. 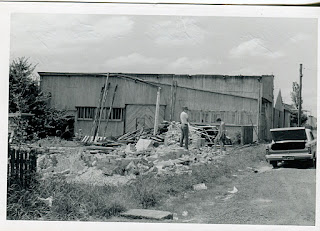 The cordial factory not long before its demolition. The road is Short Street and the site now a car park. (Photo: Bagley Collection, Campbelltown and Airds Historical Society)

Progress eventually caught up with the building and the business in 1970. Reg Hayes sold the business to Jim Goldfinch who set up in the industrial area. The property was purchased by Campbelltown Council for a car park near the Railway Station. The site today is the tar car park between Short and Hurley Streets.

I've been contacted by the Coogan family in relation to the information contained in the caption below the bottom photograph. The demolished building in the foreground was the home of Col Coogan. Its address was 21 Short Street and was on the corner of Short and Patrick Street. The large building next to it was not the cordial factory but a shed belonging to Col Coogan. The cordial factory is the building with the pointed roof behind it.

Interviews with David Milliken and Paul O'Loughlan held at Local Studies, H.J. Daley Library and available on the library website