I recently wrote an article for Campbelltown and Airds Historical Society's journal Grist Mills on the Tripp family of Campbelltown. The Tripps are probably best known for their garage that once stood on the corner of Queen and Dumaresq Street. Tragedy struck this family one Summer day in 1900 when young Austin drowned in the Nepean River at Menangle. The following is an extract taken from my article about Austin Tripp and what happened on that awful day at Menangle.


Charles and Phillis Tripp’s second child was James Austin, who used Austin as his name. He was born in 1883. Austin was a bright, talented and popular boy who suffered from a speech impediment.


The Freeman’s Journal of 2 July, 1898 wrote about a school concert at St. Patrick’s that Austin performed at. It described how “Master Austin Tripp fairly brought down the house with his comic song, The Broken-Down Masher, his ‘get-up’ was perfect, and the enthusiastic encore he received was fully deserved”.


Austin again made the news a month later, however this time the news was not as happy. On 1 August an accident occurred in Queen Street in the vicinity of Mrs W.W. Lees’ store. The horse and sulky owned by Mrs Fowler was standing by, when Austin rolled the wheel of a vehicle up the street. The horse took fright and bolted, striking another conveyance owned by Rev. J. Ashmead with considerable force. Miss Ashmead was thrown out of the vehicle but was not seriously injured. The sulky was badly damaged.


Austin’s bad luck continued in February 1900 but this time it proved fatal. He was 16 years and 9 months when, on Saturday the 3rd February 1900, he went with his father Charles and a man named Harold Brown at Menangle to fish on the river. They stayed there all night, intending to return home about 9 o’clock next morning. At about 8.15am the next morning Austin joined his father and Brown for a swim in the river. Austin could not swim, so he paddled out in shallow water for about 5 minutes. He went too far however, entering a spot where the river suddenly drops into deep water. Charles was about 20 yards from him and could see his son struggling. He swam across as fast as possible to assist him and by the time he got there he was sinking. He managed to grasp him but they both sank after Austin grabbed his father around the neck and arms. Charles then freed himself, came up to the surface, and again went down, but could not reach him. Brown helped in the search but they could not locate Austin.


After searching for about a half an hour and assisted by two other people nearby, Charles came into Campbelltown and informed the police. Constable Loomes and numerous others journeyed to the spot where the body was recovered at 3.30pm.


News of the disaster reached the town shortly before 11am on that fateful Sunday morning. It was a devastating blow to the people of Campbelltown. Austin was held in high regard and Father Dunne spoke to his congregation about his splendid character.


Austin’s body was brought back to Campbelltown on a wagon. He was buried the following day in St John’s Cemetery. The grief suffered by Charles and his young family would have been unbearable. It was theorised by Harold Brown that Austin didn’t call for assistance because of his speech impediment. 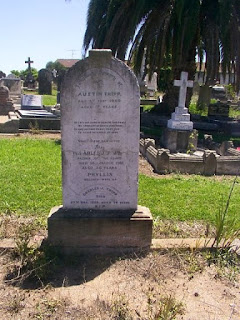