James Fitzpatrick had a long and eventful life. He was born in Limerick about 1800, and in 1822 was one of 43 Irish protesters transported to New South Wales aboard the Mangles. His charge was "attacking a dwelling with firearms" and he was sentenced to seven years. After his arrival in the colony, he was ordered to work on the roads. Large and powerfully built, James would've been a valuable asset to a potential employer. He escaped the road gangs and on recapture was returned to the road, until he was offered to the explorer Hamilton Hume.

James first came into prominence as a member of the Hume-Hovell expedition which went overland from Appin to the Geelong district in 1824. James was one of six convict servants who accompanied Hume and Hovell. Not a lot is known of James' experiences on the expedition. There is however, one amusing story. The crossing of the first river the party encountered provided one of the lighter moments of the journey, and a story that followed James Fitzpatrick for years afterwards. He hadn't learnt to swim, and when crossing Hume told him to hang on to the tail of one of the bullocks. He followed Hume's orders but was just enjoying the triumph of his arrival on the opposite bank when the beast covered him in excrement. This resulted in raucous laughter from the party.

Another interesting incident encountered by James was almost fatal. He wrote, "I went shooting ducks about half a mile or a mile from the camp, when five blackfellows ran me for my life. I sang out as I ran towards the camp; the blacks got close up and had thrown some spears at me, when Mr Hume and Boyd came to my rescue."

James was a great admirer of Hamilton Hume. After the Hume and Hovell expedition, he wrote, "I positively assert that the journey would never have been accomplished but for the indomitable perseverance of Mr Hume and that he was, in fact, the sole leader of the party."

James Fitzpatrick was given his ticket-of-leave on July 5, 1825 and acquired land in the Appin district. His sentence expired in 1829 and the following year he married Mary Ann Atkins. From his base in Appin, Fitzpatrick returned to the southern districts that he helped discover. By 1833 he had a squatting run in the Cootamundra-Yass district named Cucumla.

From the late 1840s, James purchased many farms south and west of Campbelltown. In 1859 he purchased Glenlee near Campbelltown. Glenlee, during his occupation, remained a dairy farm and a cattle-breeding stud of some note. It had 14 rooms, kitchen, pantry and cellar. The farm contained 1000 acres of grazing land and had a mile frontage to the George's River. It still stands today. 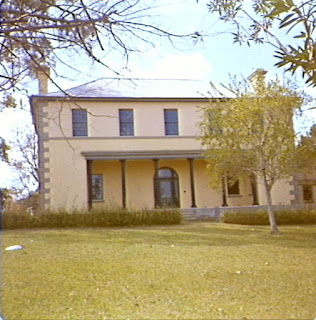 Glenlee taken in 1979 prior to renovation

James Fitzpatrick married a second time after Mary died in 1866. This was to eighteen-year-old Elizabeth Cummins and they had three children. She died in 1882 aged only 32. Three months later James Fitzpatrick died at Glenlee, leaving three young children without a parent and vast estates. He is buried in Campbelltown's St John's Catholic Cemetery.