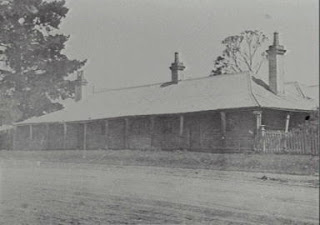 The Joiner's Arms was weatherboard and was surrounded by ten acres. At one stage it had five bedrooms, three parlours, detached laundry and kitchen, a bar and a taproom.

Where was it? An 1840 map marked the inn on the western side of Queen Street at the southern end of town. However another map drawn in 1842 showed the Joiner's Arms on the corner of the Old Menangle Road and Narellan Road. Emily Cottage occupied this position and it may have been one of the outbuildings on the ten acres around the inn. Further research supports the inn located where the car park for the Campbelltown Catholic Club is next to the grounds surrounding Emily Cottage.

I am unable to determine when the inn was demolished. The date provided for the photograph indicates that it was still standing around 1916.

The inn, like many of the day, was the location for a number of coronial inquests. One such inquest was for a 17 year old girl who must have lived very near the inn as the newspaper reports of the day give her address as the junction of Menangle (Old Menangle today) Road and Camden Road. In the winter of 1860 Catherine Hackett was burnt to death by her clothes catching fire. She was standing with her back to the fire and after turning suddenly, her clothes came in contact with the fire and instantly ignited. She ran to a neighbouring house where the flames were extinguished, but not before she was dreadfully burned from head to feet. She died about 13 hours later the next morning.

Despite the parents unimaginable grief, I was amazed to read what the coroner had to say about them. The coroner, on request of the jury, was asked to reprimand the father. He not only censured him on this occasion for his conduct but for the "dissolute and improper way in which both he and his wife have for years conducted themselves." The Sydney Morning Herald didn't hold back either by writing that the unfortunate girl was rescued from a life of shame. Certainly appears harsh considering the parents mourning but perhaps it was justified.