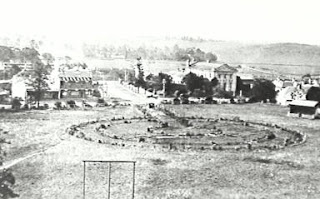 "The Green" Campbelltown where Father Therry first said Mass in 1822

September 1st, 1822, was a day of great excitement for the Roman Catholics of the Airds District, for Father Therry was to celebrate the first Roman Catholic Mass in Campbelltown. It was to be celebrated on "The Green", an area now known as Mawson Park. Unfortunately for Father Therry and his congregation, a sudden rainstorm forced a change of plans. The deluge meant that a quick alternative had to be found. The wet and uncomfortable gathering of mud-spattered settlers begged Father Therry not to abandon his Mass and convinced him that holding it in the shell of the newly built Anglican church was the best solution. At this time the Anglican church was roofed, but the interior unfinished.

The Reverend Thomas Reddall was appointed Clergyman of the area in May of 1821 and was the first incumbent at St Peters. The church was the first, and for many years the only, building within the township. It was completed in 1823 and still stands today.

Reverend Reddall was infuriated over Father Therry's actions. Reddall complained to the Governor who in turn reprimanded Father Therry. The unrepentant Irishman replied that his actions only bestowed honour on the new St Peter's church.

It seems relations between the two were not strained for too long. Not long after Christian charity prevailed and there was a donation by Reddall towards the building of a Catholic Church in the town. Perhaps Reverend Reddall had thought more about the situation and realized that they were simply taking shelter from a deluge and that he might've been forced to take the same actions.