Tucked away amongst the trees at 104 Waminda Avenue, Campbelltown is a neat little State Heritage listed cottage named "Cransley". The house seems to be built around 1882 although some sources date it to 1890. John Knight, one of the first Campbelltown alderman, bought the land in 1881 and built the house, so 1882 would seem the likely year.

The cottage is constructed of sandstone with a slate roof and has an unobtrusive and well designed verandah to the one side. It has been described as a typical "Hunter's Hill" type of house.

The original occupier of the land was Michael Wholohan who received a 50 acre grant which he held from 1821 to 1844.  After his death, the land was willed to his brother Daniel followed by other family members before being sold to Benjamin Warby in 1859. It then passed through a number of hands including John Knight in 1881. In 1918 the Government purchased the Cransley Estate as a soldiers resettlement scheme and the 391 acres was divided into 44 small farms with Cransley being the manager's residence while the project got underway.

In 1921 Bill Price was settled on Cransley and ran a poultry farm until World War 2. On his return from war he established a nursery and became well known in the area as a very able nurseryman. A 1949 newspaper advertisement talks about the variety of trees, shrubs and roses for sale. In 1965 Price surrendered 11 of the original 12 acres and kept one for the nursery. On his retirement he subdivided the acre and gave part of it to Campbelltown Council to be used as a park which is now known as Cransley Reserve.

On Bill Price's death in 1976, the property passed to his widow and son who then sold the property at auction to Alice Minut. Alice developed the house as a craft centre and built a pottery at the rear. In 1982 it was sold at auction and again in 1994. 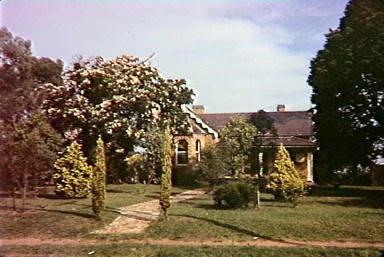 The photograph above is of Cransley in 1982. Today the house is partly hidden behind well established trees. (Verlie Fowler Collection).