Many locals would remember Jack Hepher as the man who for years rode an old penny-farthing bicycle in the Fisher's Ghost Parade. Jack had a love of bikes that lasted throughout his long life.

Born on May 30, 1915, Jack Hepher's family came to Campbelltown in 1919 when his father, Charles, a World War I veteran, became one of the first poultry farmers in the famous "Soldier Settlement" that once existed along Waminda Avenue.

Jack's father opened a bicycle shop in Queen Street in the 1920s and this became popular in the town for many years. In 1933 Jack and Reg Rutter formed the Campbelltown District Cycle Club. The club held its first road race, a 10km event between Campbelltown and Minto that same year. Jack would become club champion six times, during which he rode in 16 open classic races including six Goulburn-to-Sydney races.

Another route that Jack and the club would take was from Appin to Campbelltown Post Office. This would take him 25 minutes on what were very ordinary roads. They had wooden rims and had to do their own repairs with no helpers like today.

In laters years he would own and run Fisher's Ghost Cycles in Waminda Avenue.

It was however his appearance at the Fisher's Ghost Festivals on his penny-farthing that made him famous. His son John made the comment that "his last race on that bike was at Randwick Racecourse in 1995 when he finished third in an exhibition race at age 80."

I had the pleasure to meet Jack at his home in Mittagong when I interviewed his wife Lily in 2010. They were married for 69 years.

Jack passed away at a Bundanoon nursing home in 2011 aged 96 years. 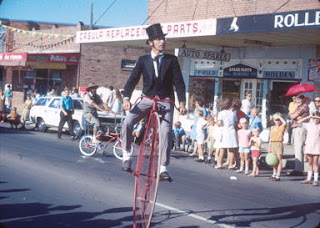 Jack Hepher on a penny-farthing bicycle in parade in Queen Street during 2nd weekend of sesquicentenary celebrations, 1970 (Hugh Bairnsfather Collection) 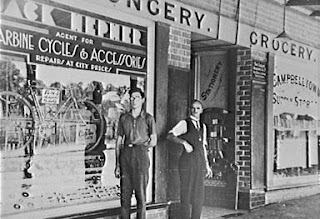