"Mossberry" consisted of a group of two buildings linked by a lattice breezeway, together with a timber shed. There was also an outbuilding which was believed to have been built by Kable around 1820. The main building was thought to have been built about 1840 and likely to have been constructed some five years after the first. It was a Georgian house with external walls of dressed stone which were later rendered and painted.

The lattice breezeway and the north east verandah to the main residence were added during the 1930's and used to link the living areas of the main house with the utilitarian areas located in the original residence.

The property passed from the Warby family to various owners up until the early 1990's. In 1993 an Interim Conservation Order was made on it but because of constant vandalism, decay and neglect the house was seen as beyond restoration and was demolished. It was located at 15 Chamberlain Street. 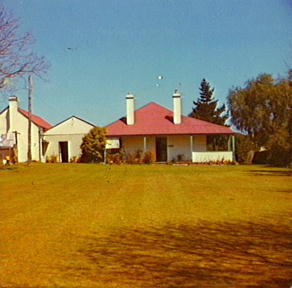