Just south of the original Woodbine homestead, and adjacent to the old Sydney Road (since renamed Hollylea Road) there once stood an imposing landmark, Keighran's Mill. John Keighran purchased the site in 1844 and in 1855 built the mill on the banks of Bow Bowing Creek. The mill was a relic of colonial days when wheat was harvested on surrounding farms. It was built of sandstone and had a shingled roof.

During the 1870s the mill fell into disuse when rust ruined local wheat crops. An 1875 entry in James Payten's diary, now held by Campbelltown Library, reads "Harris and I nailed up doors and windows in old mill". This suggests the mill was by then deserted. In 1879 Kidd and Fieldhouse acquired the mill but probably didn't use it for gristing wheat.

Most Campbelltown residents who remember the picturesque landmark knew it as Payten's Mill. Percy Payten was the last member of the Payten family to own the mill. In 1954 he offered the mill to the Campbelltown and Airds Historical Society.

In later years, the mill became a favourite haunt of children's games. Young Rose Payten and her brothers loved to climb its secluded heights. In a recent interview I did with Leumeah local Noeline Jury (nee Hawkes) she describes how the mill entertained them as children and later as teenagers. On one occasion she was exploring the mill with a friend when they noticed a noose hanging from the rafters! This, combined with the constant croaking of frogs in the nearby creek, added to the creepiness of the place.

A large sign advertising 'Wolfe's Schnapps' was painted on the side of the mill. This can be seen in the photograph below taken by Steve Roach in 1959. 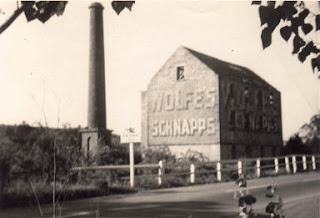 By the 1960s, Council considered the mill to be in a 'ruinous and dangerous state' and the Department of Main Roads indicated the Campbelltown Road was about to be widened. The historical society also didn't have enough funds at the time for its restoration and the Heritage Council of NSW had not yet come into being. So, in 1962 the mill was dismantled and the stone was used in the building of the RAE Memorial Chapel at the School of Military Engineering at Moorebank, which opened in 1968.

The old mill was one of the all-time favourite landmarks of our district. It even features as the logo for Campbelltown North Primary School.

Where is the site of the mill today? The re-alignment of Campbelltown Road makes it difficult to pinpoint its exact location using old photographs. After talking to a number of local residents who remember the mill, the general consensus is that it was located somewhere in the area bounded by the overhead railway bridge on Campbelltown Road, Bow Bowing Creek and Campbelltown City Ten Pin Bowl. 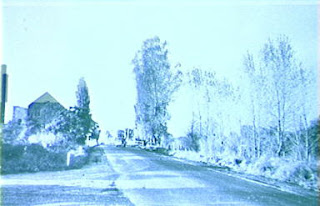 This undated photograph shows the mill adjacent to Campbelltown Road.
Posted by Andrew Allen at 16:40