The library was fortunate recently to receive the written memories of Laurie Stroud. Laurie grew up in Kentlyn and spent the first 25 years of his life there. It reveals everyday life in a small community, including hardships and highlights.

I thought I would share some snippets of Laurie’s valuable addition to the library’s collection.

Not so long ago I took a “trip down memory lane”. To be more precise I drove along Georges River Road where I lived for the first 25 years of my life - from the 1930s through most of the 1950s. This brought back many memories and I thought it might be of interest to historians and residents of Kentlyn (old and new) if I were to record some recollections of the way things were in “the good old days”. It might also serve to indicate the significant changes that have taken place in the intervening years.

Georges River Road was the main thoroughfare in Kentlyn. It had a solid stone base (laid by convicts or the unemployed on the dole during the Depression?). Every 2-3 years the council would grade the road. The stone base meant that the grading essentially filled in the gaps between the stones – only to be washed away during the next heavy rain fall. The main benefit of grading the road was that a smooth area was created on either side of the road where the soil and gravel had been scooped on to the road. This smooth area was great for the few of us who had bikes. We could zoom along the side of the road at great speed without having to dodge the ruts. Regrettably this, too, was short lived.

For ease of identification particular places on the road were named after residents (eg Carter’s Corner and Donaldson’s Dip).

Never did I expect to see the road tared, let alone adorned with street lights.

Well, we had roads but precious little else. For water we relied on the rain the fell on the roof of the house and flowed into a tank. It was a precious resource. Leaving a tap running was inexcusable. As for gas – a pipe dream. Sewerage – no chance. We did not even have the services of the “night cart”. No garbage collection but that did not matter to us. We disposed of our own garbage in what would now be regarded as an “environmentally responsible” fashion.

Mum tried a couple of times to get the telephone connected but was told by the Post Master General’s Department that she would have to meet the cost of extending the existing line. That was estimated at around 700 pounds ( more than $50,000 in today’s terms) which was far more than the farm was worth at the time.

However, electricity eventually came to the area around 1948. That was great but home owners had to meet the cost wiring from the street to the house. Sometimes this involved the erection of a pole to carry the weight of the wires. An electrician had to be employed to install the lights and power points inside the house. Then there was the cost of purchasing the “mod cons” to use the new power source. This presented quite a financial challenge.

The Georges River was an important feature in the local lifestyle. It was the nearest place for us to swim. Unfortunately, after a swim, the long walk home in the heat made us want to immediately return to the cool waters.

A favourite spot was “The Elbow”. Here a rope was attached to a branch of a large tree overhanging the river. We could swing out over the river and drop off into the deeper water. This was great fun. 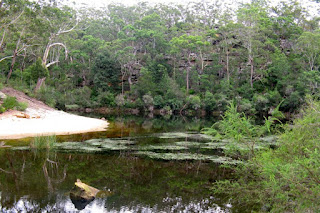 The river was not just a place for recreation. Regrettably, every 2 or 3 years one of the bush walkers who visited the area would drown. On notification of the tragedy the police would immediately conduct a search of the area. Seldom did they find a body at this stage. But they knew to return about a week later when they had the most unpleasant task of retrieving the bloated corpse.

Rabbits formed a regular part of the diet. They were plentiful and were shot, caught in traps or chased out of their burrows by a ferret into a net. Some homes had a vegetable garden plus a few fruit trees (all organic produce, even if we did not realise it at the time). There were also eggs laid by chooks – all free range. Local cows provided milk and butter for their owners and neighbours. After the autumn rain there were mushrooms to be collected in the open paddocks. They were much more delicious than the ones sold in the shops these days.

In the 30s and 40s residents had to walk to Campbelltown to order supplies, ride a bike or travel in a horse and buggy. I was not until later in the 1940s that cars started to appear. Doug McKenna owned one of the first motor vehicles – a battered T-model Ford which had been converted to a ute.

A major development occurred around 1948 when Jim Roberts started a bus service. The route was from Campbelltown Station, via the Soldiers’ Settlement and Georges River Road, terminating at Carter’s Corner (the junction with Peter Meadows Road). It was later extended to Minto Station. A major catastrophe occurred when Jim Roberts was severely burned when petrol ignited while he was repairing one of the buses. The Kentlyn spirit came to the fore and as a result of generous donations from residents the bus service was able to continue to operate.

There were limited options for communication so locals took every opportunity to have a chat. Generally, this was when they visited one another or there was a problem to be solved. Despite the distances involved, every resident living on Georges River Road knew every other resident from Junction Road to the river. Quite a contrast to today when some may not even know the person who lives opposite.

Local residents worked together to improve amenities in the area. The school had a Parents & Citizens Association and there was an Agriculture Bureau which served as a “Progress Association”. It was largely responsible for the location of Kentlyn Primary School.  At one stage a cooperative was formed to buy wheat and other goods for the farms. 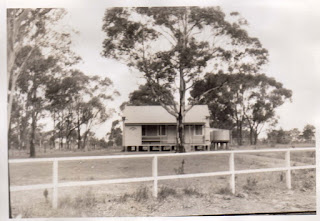 Perhaps the major community effort was the erection of a hall near where Kentlyn School is now located. The land was donated by Mrs. N. Payne. Fund raising activities were held, including a Queen of Kentlyn competition. Voluntary labour did the rest. The finished product was basically 4 walls with a polished tallowwood floor.

Every Saturday night the hall became the centre of entertainment when a dance was held. Music was provided by a piano played by a volunteer. Supper was always served, thanks to the ladies who brought cakes to the gathering. Initially water for a cuppa was boiled in a kerosene tin over an open fire near the building. (One had to remember to place a green stick over the top of the tin to stop a smoke taste permeating the boiling water.) When electricity was connected, an urn was purchased to provide a much easier means of boiling the water. However, it was still necessary to go to the school to collect some water from the tank there.