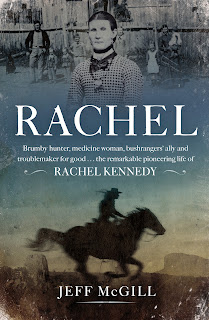 Last week I was invited to the launch of Jeff McGill's new book titled Rachel. Jeff's book has been 40 years in the making and is the result of meticulous research and passion, typical of his books. I enjoy the way Jeff transports you back in time. I feel as though I am there on the crowded and chaotic goldfields; with Rachel on her horse as she chases brumbies through the Warrumbungles or sharing her overwhelming grief for her husband, taken so early as many from that period were. What a life she led. Too often the lives of women such as Rachel are overlooked, despite the significant contribution she made to the places she lived. It is easier to write about men from the time as their lives were regularly described in glowing obituaries. However, pioneering women's achievements were often overlooked. This makes Jeff's Rachel all the more deserving of recognition.

If you are seeking a book that you can't put down for your next read, look no further than Jeff McGill's Rachel. Published by Allen Unwin- Australia, it is available at most book shops and copies have been ordered for Campbelltown Libraries.