First Accident on the F5

The new section of the F5 freeway from Campbelltown to Yanderra opened on 15 December 1980. The new stretch was opened by Premier Neville Wran, with large queues of cars banked up for kilometres waiting for the opening. The new section reduced travel times greatly, but unfortunately accidents on the freeway still occur. Strangely however, the first accident on the freeway happened BEFORE the official opening.

On the weekend before the opening, Sergeant Olivera and Constable Bailey were patrolling the new section at the request of the Department of Main Roads. The DMR had been concerned that people may have misused the freeway before its official opening. About 12 kilometres south of Campbelltown, a kangaroo appeared from the grass on the eastern side of the road directly in the path of the police car. Despite braking, the police car was unable to avoid hitting the kangaroo. It died instantly. Damage to the police car was minor and neither officer was injured. 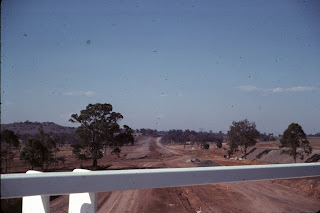 Looking north from the bridge over construction of the F5 Freeway at Menangle Park in 1976. (Trevor Richardson Collection).