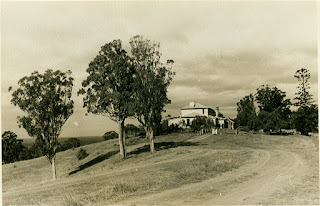 Perched at the summit of a high ridgeline looking west towards the Blue Mountains, Leppington House stood conspicuously here in its surroundings for close to 130 years. It was a grand two storey mansion that had a long and interesting history. To give you an idea of where the house once stood, its access was from today's Denham Court Road.

The house was built on a land grant to William Cordeaux, who assigned a party of convict labourers to clear the ground at his property, after which construction of the house began. The house is likely to have been constructed between 1823 and 1828. It was described in the 1930s in the Camden News: "The situation for such an old homestead is ideal, and commands a panoramic view on either side, such places as the Sanatorium at Wentworth Falls, Sydney Harbour Bridge, Blue Mountains round to The Gib at Bowral are easily picked out."

The original owner William Cordeaux arrived in Australia on the ship Friendship in January 1818. He came to the Colony to join the Commissariat Department as Deputy Commissariat-General. By 1828 William was the largest sheep and cattle owner in the district. He also employed a large number of convicts as well as shepherds. Though his Leppington property was the main base of the estate, most of the Shepherds worked at Cordeaux's other property at Sutton Forest.

James Payten rented the property in 1873 until he bought his own farm. William Cordeaux died and his wife Anne sold the property in 1875. By 1911 the property was owned by a man named Charles Perry. He and his wife Fanny established a country tea garden at the homestead as well as a riding school where visitors would hire horses to ride over the property. Perry also had aviaries with around 600 birds of all varieties. In addition there were kangaroos, wallabies, paddy-melons and monkeys in his collection of animals.

The building was still standing in 1956. The house site now forms part of the East Leppington Development Precinct and continues to be used for grazing cattle in undeveloped areas, but has been re-zoned for development. The site of Leppington house, now referred to as the Leppington House archaeological site, will hopefully be listed on the State Heritage Register. The present major landowner, Campbelltown Council, the Heritage Office and the NSW Department of Planning and Infrastructure all support conservation of the Leppington House archaeological site as a local park. The original carriageway of Leppington House Estate is today defined by a mature double-tree row of native species and identified as being of exceptional cultural heritage significance. 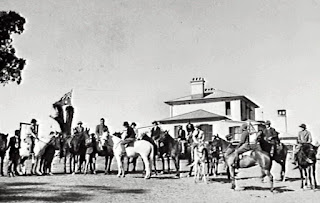 Participants in a hunt at Leppington House in July 1935. They were thought to be members of the Ingleburn Horse and Pony Club.