I recently came across an amusing article from the Australian Town and Country Journal dated December 30, 1878. The article was based on a report of a cricket match between Campbelltown and a combined team from Menangle and Morton Park played on December 28. After Campbelltown won by 13 runs the reporter described how "The losing team were most "splendidly" treated, being left to fish for themselves, not even a sandwich or a glass of beer being provided by the Campbelltown Club. The sooner the committee resign the better." One would hope they lifted their game! 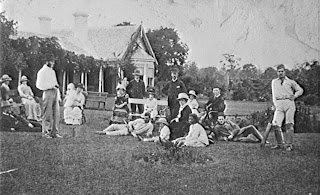 Above is a photograph taken in 1881 of a cricket match at "Glen Lorne" on Appin Road.
Posted by Andrew Allen at 16:25