The Hume and Hovell Monument 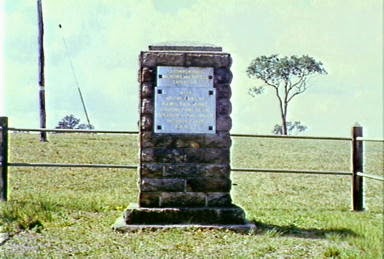 I am sure many of you have driven past it but some of you might not know its significance. Located between Campbelltown and Appin on the left hand side of the road heading towards Appin is an obelisk dedicated to the explorers Hamilton Hume and William Hovell. This stone monument was erected by the Royal Australian Historical Society in 1924 to commemorate 100 years since the explorers Hume and Hovell set out on their exploratory journey to Port Phillip in Victoria.

The monument was unveiled in 1924 by the Minister for Justice, the Hon. T.J. Ley. A speech was made by the President of the Royal Australian Historical Society Aubrey Halloran which began with "Standing today upon this historic site where, a century ago, two of Australia's greatest explorers commenced their journey into the great unknown, our hearts are stirred at the memory of their magnificent pioneering work in blazing a trail to Port Phillip".

Stone recovered from the ruins of Hamilton Hume's house at Brookdale Farm (adjoining the monument) is said to have been used in the building of the monument. The inscription reads "To commemorate the Hume Hovell expedition. The site of the home of Hamilton Hume. Starting point of the expedition to Port Phillip October 2 1824. R.A.H.S."

As you look from the monument out to the west, you can only imagine what both explorers were thinking as they took those first few steps with their bullocks, horses, dogs and four other convicts into the unknown. The expedition was a success as they accessed previously unexplored land south of the Murrumbidgee. They reached Corio Bay on December 16 and reported suitable grazing land at Westernport to the Governor.

Unveiling of the Obelisk at Appin
Journal of the Royal Australian Historical Society
Vol. 11 Part 2, 1925 pp57-62